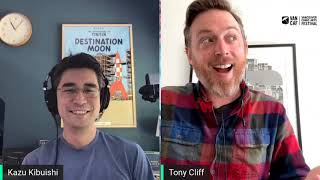 More about the authors: Kazu Kibuishi is the writer and artist of the New York Times Bestselling AMULET graphic novel series, published by Scholastic Graphix. He is also the editor/art director/cover artist of the EXPLORER and FLIGHT Comic Anthologies, and the creator of the webcomic Copper. His debut graphic novel, Daisy Kutter: The Last Train, won a YALSA Best Books for Young Adults Award in 2005. In 2012, he illustrated the covers for the Harry Potter 15th Anniversary Edition paperbacks. Kazu is 4th-generation Japanese-American. His great grandfather opened the oldest Japanese grocery store in the US, called The Katagiri Store (open since 1907), and it is located in New York City. His mother grew up in Brooklyn, but moved to Tokyo to attend Keio University. Kazu was born in Tokyo, Japan in 1978, and his brother was born in 1979. The family moved back to the United States in 1981, and the boys grew up near Los Angeles, California. Kazu began drawing comics at the age of 5. Despite spending much of his time drawing comics, Kazu decided not to attend art school and enrolled at the University of California Santa Barbara, where he graduated with a degree in Film and Media Studies in 2000. After graduating, he took jobs in graphic design, architecture, and the animation industry, but found his way back to making comics. He currently works as a full-time graphic novelist. He also speaks at schools. Kazu lives in the Pacific Northwest with his wife, author Amy Kim Kibuishi, and their children.

Tony Cliff is the author of the critically-acclaimed DELILAH DIRK series of books, the most recent of which is DELILAH DIRK AND THE PILLARS OF HERCULES, released in 2018. A New York Times Bestselling author and nominee for Shuster, Harvey, and Eisner awards, Tony was raised in and currently lives in Vancouver, where he is a veteran of this city’s animation industry.