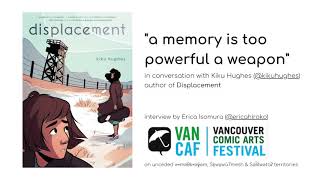 DISPLACEMENT: “A memory is too powerful a weapon” In conversation with yonsei artists Kiku Hughes and Erica Isomura

* Kiku Hughes’ Displacement (published by First Second Books) is a magical realist story about a Japanese American teen who is pulled back in time to witness her grandmother’s experiences in an incarceration camp during the Second World War. Kiku is on vacation in San Francisco when she suddenly finds herself displaced to the 1940s Japanese American internment camp where her late grandmother was forcibly relocated. When Kiku finds herself “stuck” back in time, she gets the education she never received in history class. Kiku witnesses the lives of Japanese Americans who manage to cultivate community and commit acts of resistance in order to survive, despite the denial of their civil liberties. When will Kiku be able to return home? And what lessons will she bring back to present-day America? Kiku Hughes weaves a riveting, bittersweet tale that highlights the intergenerational impact and power of memory in this stunning debut.

* Kiku Hughes (@kikuhughes) is a comics artist and writer based in the Seattle area. Her work has been featured in Avatar: The Last Airbender – Team Avatar Tales, ShortBox, Alloy: Electrum anthology, ELEMENTS: A Comic Anthology by Creators of Color, Beyond anthology of queer sci-fi and fantasy comics, and others. Her debut graphic novel Displacement, published by First Second, is now available at local bookstores everywhere. Kiku tells stories that uplift, empower, and allow underrepresented people to feel seen. She is interested in soft sci-fi, lgbt characters and relationships, found family narratives and anti-capitalist agendas. | https://geniusbee.tumblr.com